The team successfully made it to Christchurch, New Zealand, today after 16 hours of travel. We flew from Santa Barbara to Los Angeles, then onto Auckland, New Zealand (~13hr flight), and finally Christchurch (~1.5 hrs). In the process we completelly missed the 18th of November (we left on the 17th and arrived on the 19th) – that’s what happens when you cross the international dateline!

This is our spot map so far – if you want to see more click on the Spot us! tab above 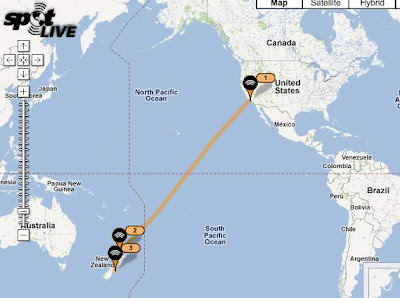 Christchurch is the logistics hub for the United States, New Zealand and Italian Antarctic research programs. From here we will get kitted out with all our polar clothing (tomorrow). Christchurch will also be our departure point for Antarctica. On Monday, we are scheduled to fly from Christchurch to McMurdo base aboard a C-17 Galaxy military transport plane (more about that soon!).

Christchurch has a long history of supporting Antarctic research and expeditions. Robert Scott provisioned his ships here during the Discovery 1901-04 and Terra Nova 1910-13 expedition. He took on board everything: hay to feed his ponies; coal to power the ship as well as food and building materials. You can find more about Robert Scott here

There is a memorial to Robert Scott and his men near downtown Christchurch. It commemorates their valiant efforts in reaching the South Pole and their unfortunate deaths on their return journey just a few days walk from their base. The memorial also recognizes the important role that Scott and his men played in pioneering Antarctic research – as well as being explorers, Scott’s expeditions undertook research on a wide variety of subjects – from geology to biology to zoology to meteorology. 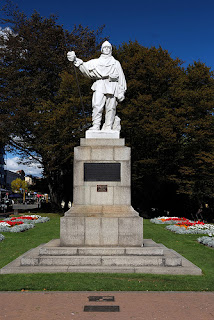 Unfortunately it was severely damaged during the 22nd February earthquake that struck Christchurch. Here is a photos of it after the earthquake. 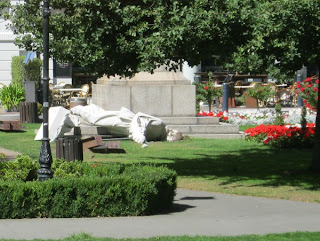 Today we also had a chance to walk around downtown Christchurch. As maybe some of you will know much of downtown Christchurch was devastated by a series of earthquakes during 2010-2011. On the 4th of September 2010, a magnitude 7.1 earthquake occurred at 10 kilometers depth. This caused widespread damage but fortunately no deaths. On the 22nd of February, 2011 a magnitude 6.3 aftershock struck just to the north of Lyttelton, the city’s harbour. This earthquake was very shallow, at only 5km depth. This caused violent shaking, and is amongst the most intense shaking ever recorded in an urban area. Unfortunately, this earthquake resulted in the deaths of 181 people and many buildings and landmarks were severely damaged. On the 13th of June two more large aftershocks occurred, and although more building damage occurred, no more lives were lost.

Much of downtown Christchurch has only recently re-opened, and there are several areas that are still cordoned off because they are too unsafe for people to enter. We found visiting the outer part of downtown to be a pretty sobering experience. It certainly looks quite different to Christchurch that some of us remember. There are also new ‘container shops’ constructed of stacked shipping containers – very post modern! Many of the locals we spoke to were upbeat about the city’s prospects, but it must be difficult for anyone who hasn’t experienced them first hand to really comprehend what these events were truly like to go through. Here are a few pictures of what we saw: 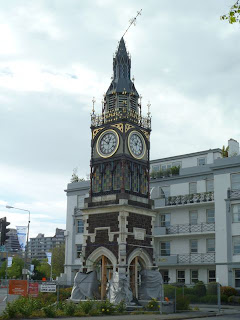 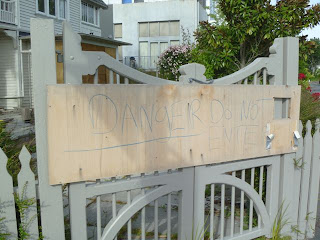 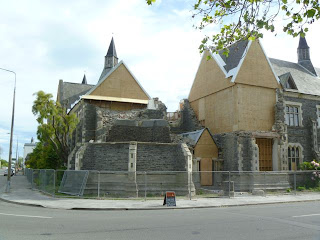 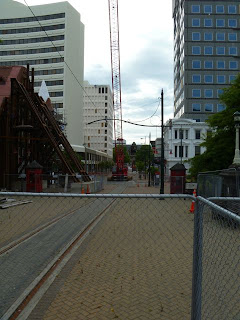 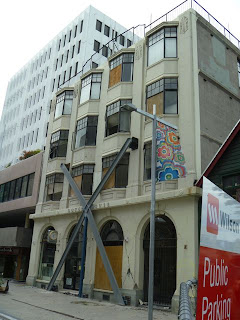 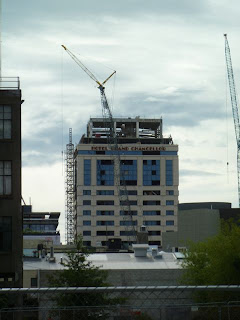 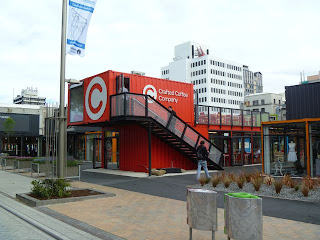 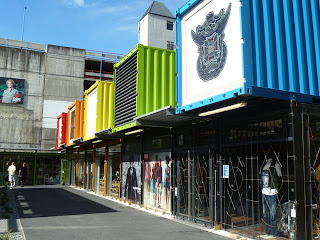 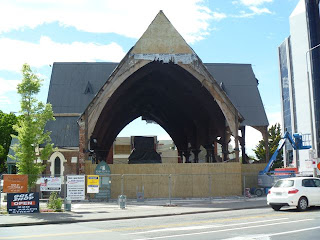 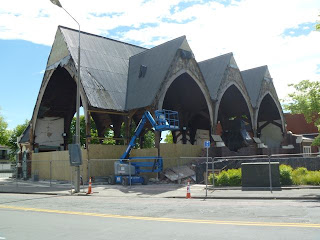 The countdown is on! We have only 4 days to go before we leave the US. Our Principal Investigator (John) has been collecting all his things together to pack.

Here is a photo of what he’ll be taking. 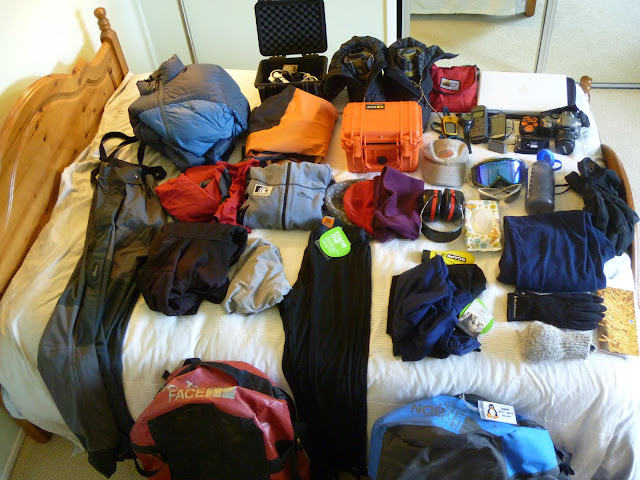 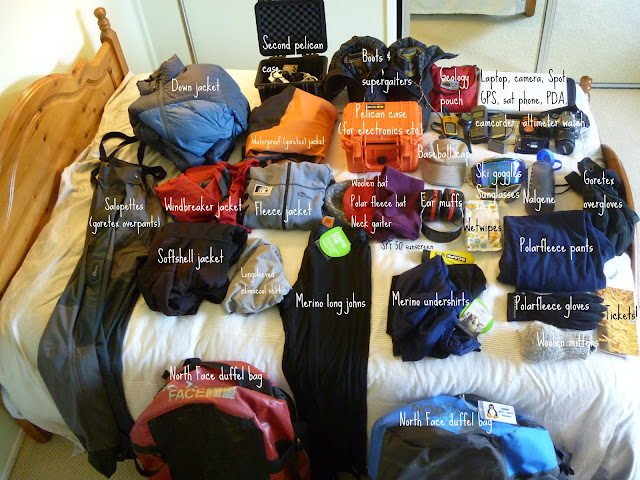 In addition, we’ll all get extra clothes in the Christchurch Operations Center. We’ll update you with some pictures once we’re all kitted out. John takes more of his own gear than he actually has to – he prefers to wear his own things that he knows fit and work in the conditions. But really, the Antarctic Program supply everything except gloves, socks and drink bottles!

When you work with the US Antarctic Program, you learn to love acronyms! Our latest news is that all the whole team is now “PQed”. This means that we are all physically qualified – wisdom teeth have been removed, flu shots given, EKG readings taken…and we’re all fit and healthy to spend 60 days on the ice. Anything that goes wrong now will have to be fixable by a trained First Responder and a first aid kit – that’s all we’ll have!

We also have our dates for deployment, so its getting close now. We (John, Bryan and Graham) will be leaving Santa Barbara on November 17. Because of the date line we’ll be arriving in Christchurch on November 19, and Jo will be ready and waiting for us. We’re due to fly down to the ice on November 21, weather permitting, so we’ll be spending Thanksgiving in the field. Perhaps we’ll have to see if we can pack some turkey! Then John will be flying out on December 15 and everyone else will be there for a cold Christmas and New Years – back to NZ on January 12.

So, we’ve got just a few weeks to get everything ready – extra socks, suncream, thermal underwear and eating as much pasta as possible to build up an extra layer of warmth! 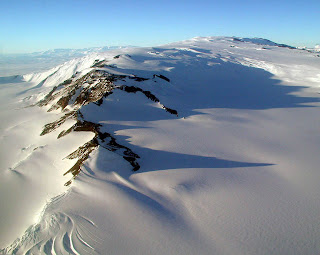 We’ve been working hard to think of some different ways to update this blog and our facebook page from our field sites in Antarctica. We’d really like to keep everyone up to date on what we’re doing and how our work is progressing. Unfortunately there are no phones where we’re going – no cell phone coverage, or wifi, unfortunately.

So, we have to rely on satellite technology to send and receive emails and blog updates. We are experimenting with two different systems. The first involves a 2005era PDA (complete with stylus – no touch screen here!) attached to an Iridium satellite phone. The satellite phone connects to the PDA and works as a (slow) modem. Think dial up on a slow day! It takes around 4 to 5 minutes to send an email with a few small pictures. 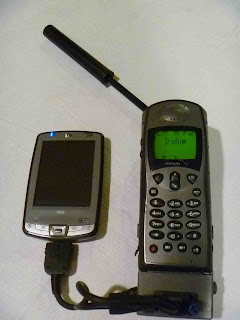 We’ll have a laptop which we will use to make backups of our field observations / measurements, photos and videos. The satellite phone can also be connected to the laptop to send emails and blog updates. The laptop is slightly more complicated because it needs to be kept warm, which can be a challenge in Antarctica! 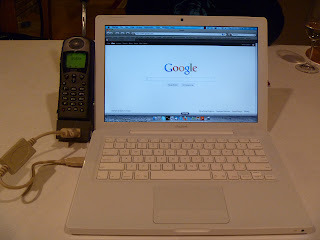 We’re also bringing a couple of other cool things to try out: We are taking an iPhone with a geological compass app ‘Lambert‘ It’ll be interesting to see how well the iPhone performs in cold weather and close to the magnetic pole. We’ll still rely on specially calibrated Bruntons but we’ll let you know how it works out! 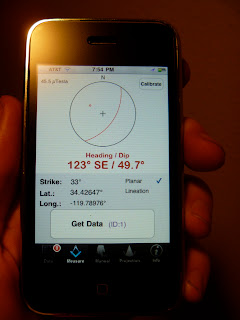 We also have a spot device – basically it’s a small GPS transmitter that sends a location to a website as often as we like. On our blog you’ll see a page called “spot us!” This page will show our location every time the team updates their position. This is a neat way to keep up to date with where we are and what we’re up to. 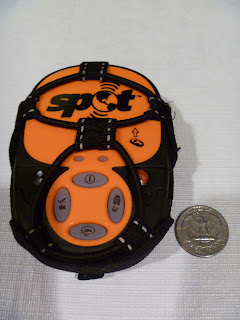 A big thank you to Richard Laronde for his suggestions regarding the PDA – sat phone connection.

There is a lot of paperwork to be sorted out. Firstly, John, our Principal Investigator works with everyone at the National Science Foundation, United States Antarctic Program and Raytheon to organize all the logistics. They have to agree on how many people are going, where, when and how. They will arrange who is flying in and out of the field (from McMurdo, the base) on what dates; who needs to take the “Happy Camper” field safety course and whether we will need to move camps during our field season. They also need to know all the details of how much people weigh and how much the tents, bags, gear and food weigh as well. This is to make sure that the helicopter (that flies them from McMurdo to their field camp site) is not overweight and is properly balanced.

Once this is all organized, each of our team need to be medically and dentally qualified. This requires having a full physical exam, a flu shot, any expired vaccinations must be caught up, a PPD/mantoux test (to check for tuberculosis), blood and urine screens, an EKG (echocardiogram of the heart) and everyone must fill in a self-evaluation of their medical history. In addition, everyone’s teeth must be cavity and problem free. If anyone has any issues now, they have to be filled or pulled out before we go!

This is all done because Antarctica is so far away from everywhere and everyone. If someone gets seriously sick in the field or has problems with their teeth, its not at all easy for them to get help or medical care. We want to make sure that everyone is healthy and we have an enjoyable, safe trip! 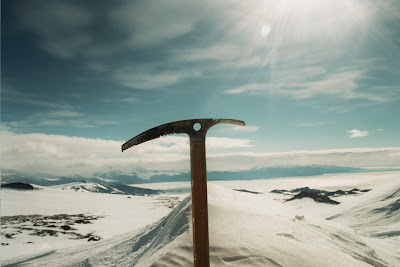 There are a few steps to getting to the TransAntarctic mountains, which are our final destination…as you can imagine, Antarctica is not the easiest place to get to.

Firstly, we have to get from California, to Christchurch, New Zealand, then to McMurdo Sound, Antarctica. 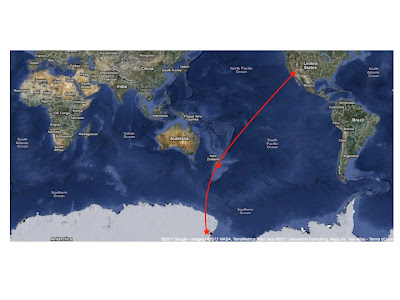 Christchurch is located in the South Island of New Zealand, and is where the United States Antarctic Program (USAP) and Antarctica New Zealand are based, and where all US and NZ Antarctic travellers leave from. (It’s also where the big earthquakes were earlier this year and last year).

Our first leg is to fly from Santa Barbara (via Los Angeles) to Auckland (a 12 hour flight – you can see Auckland near the top of the North Island) and then from Auckland to Christchurch (about 1 1/2 hours).

We arrive in Christchurch and go visit the people at the USAP to get all our gear. (Look out for an update once we get to New Zealand to see what we’ll be wearing.) Once we’ve got everything ready, filled out all our paperwork, we’re ready to go on the next flight. We can never know exactly when this will be, as it depends on the weather. If its too windy, or too cold, or too snowy, we’ll have to wait for the weather to clear.
The flights to Antarctica are run by the US Airforce, so the plane is a bit different from what you’d expect on a normal commercial flight. We’ll be flying on a C-17 Globemaster plane which looks like this: There aren’t really proper seats inside, or any flight attendants! For take off and landing everyone has to sit on seats which are bolted to the floor around the cargo, and then after takeoff we can go and find a more comfortable place to sit/lie – on the cargo or on a box. The flight takes about 6 hours depending on the wind, so its not really that comfortable! As you can see, there isn’t a lot of room! 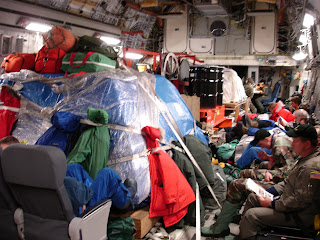 Once we arrive in Antarctica, we’ll be staying firstly at McMurdo which is the American base (just around the corner, about 2 miles away is Scott Base, which is the New Zealand base).
While we’re at McMurdo, we’ll collect all our food supplies and load them into big wooden boxes. Then, we’ll take a helicopter flight to our field area. We’re heading into TransAntarctic mountains which are here: 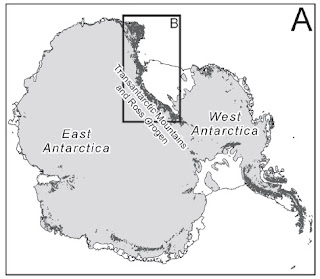