Robert Holder is a PhD student at UCSB. He grew up in hiking, climbing, and skiing in Bishop, California; lived in Sweden for a short period during high school and again as an undergraduate; and completed his bachelor’s degree in both geology and “Scandinavian Studies” at Gustavus Adolphus College, Minnesota, in 2012. Before becoming a graduate student, he worked as a student ICP-MS lab technician at Gustavus and a field technician for the Air Pollution Control district of Inyo, Mono, and Alpine counties in California. He received his MS in geology at UCSB in 2014, for which he, coincidentally, did fieldwork in Scandinavia (Norway this time). His research involves a combination of fieldwork (Norway and Madagascar), geochronology (determining the ages of rocks), and modeling mineral growth/equilibrium to understand how the continents of Earth have grown and changed through time. Demian Nelson is a PhD student at UCSB working with  John Cottle. Born in San Luis Obispo, CA, Demian has spent most of his life living on the coast of California. As a graduate of Cuesta Community College in San Luis Obispo he transferred to UC San Diego to study Earth Science. While at UCSD he became a McNair Pre-doctoral Scholar and completed an honors thesis as an undergraduate researcher in the Scripps Isotope Geochemistry Laboratory. After graduating summa cum laude and with high distinction he now pursues a PhD in Geological Sciences at UCSB as a National Science Foundation Graduate Fellow. He has diverse research interests with a focus on Antarctic and Californian geology (see his website for more details). He also has diverse recreational interests including, but not limited to: surfing, cycling, swimming, volleyball, diving, climbing, and dancing. Nicoletta Browne is a geochemistry M.S. student at UCSB who grew up first in Tucson, AZ and then in the San Francisco Bay Area; she’ll always argue that the latter area outdoes just about every other place, food-wise, though Tucson might have it beat with Mexican food. For her undergraduate degree, Nicoletta went to Pomona College in Claremont, where she studied geochemistry and completed a Senior Exercise with Distinction, studying the growth of sphene crystals during skarn formation. She also undertook a KECK Geology Consortium project in Iceland, studying lava flows. Having been surrounded by mountains all of her life, she’s happy to be in the Santa Barbara area, and she’s grateful for the improved air quality and reduced traffic after four years of being in the Los Angeles Basin. She has several interests in igneous and metamorphic petrology but primarily studies lamprophyres from the East Antarctic Craton with John Cottle, and she is currently a Chancellor’s Graduate Fellow in the Department of Earth Science. Outside of geology, Nicoletta plays the cello and formerly hosted a radio show at KSPC, a non-commercial college radio station in Claremont; she’s probably more opinionated about music than just about anything else. She’s also an avid hiker and a devoted anime fan, and she writes for an anime review site when she has spare time. 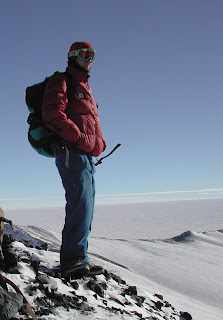 John Cottle is an Associate Professor at UC Santa Barbara and is the principal investigator for this research project. Originally from New Zealand, John studied for his B.S. and M.S. at the University of Otago in Dunedin, New Zealand. In 2004, he moved to Oxford University for his PhD, supervised by Dr. Mike Searle and Prof. Randy Parrish. His thesis focused on understanding the geology of the Everest Himalaya in southern Tibet. After completing his PhD he worked as a Postdoctoral scholar at the NERC Isotope Geoscience Laboratories in Nottingham, U.K., before joining the faculty of the Earth Science department at UCSB in 2009. Since completing his PhD, John has continued to work in the Himalaya and has expanded his research program to understanding the evolution of the Transantarctic Mountains. In addition to his tectonic research, John helps run a state-of-the-art mass spectrometry facility at UCSB dedicated to measuring a variety of isotopes and elements in geologic materials. Outside of geology John enjoys exploring the outdoors with his young family, skiing, climbing, surfing and growing fruit trees. This will be John’s 7th trip to Antarctica, having previously worked for the New Zealand Antarctic Research Program both as a scientist and guide. You can find more about John’s research on his faculty website.

One thought to “Meet the 2015 Expedition Team”