While the previous week had been governed by seemingly continuous snow showers we are now basking in sunshine. Today and yesterday we have been blessed with calm, sunny weather which we weren’t sure existed in Antarctica. There was wind up high yesterday which was moving all the fresh snow around but at lower elevations we only got the occasional gusty breeze. With the wind and sun working together the mountains have mostly been transformed back to what we previously knew them as – less white and more rock.

We made the most of the weather yesterday with a long day out up the North side of Rucker Ridge, above the Walcott Glacier. Finally the snow had melted away and we were able to actually see the rock and outcrops. Jo spent the day lapping up the views and sunshine whilst drinking her tea while the boys geologised. Although the sunscreen was the order of the day, we must point out that as soon as there was a breeze the temperature was around -10oC so we refrained from sunbathing. Late afternoon we reached around 1550m and the wind hit us. Still plenty of snow at this height (much of it being blown around) and with the anemometer registering a windchill of -22oC our motivation to continue waned pretty fast. We’re going to be dealing with enough of that at our other camp, no need to push it now. The wind dropped as quickly as we descended down the edge of the glacier. Blue sky, beautiful ‘evening’ light, stunning situation with seracs towering high above us, the valley below stretching out to Walcott Bay and Mt Discovery. The snow underfoot was still light and fluffy and Jo almost shed tears at the injustice of not having skis to take advantage of such perfect conditions. As we rounded the corner back to camp we were greeted with the rather ominous sight of cloud pouring over Mt Huggins and the other peaks (very similar to The Divide from Mt Cook Village for the Kiwis). With the whole upper glaciers being stripped of their snow by the wind we were somewhat fearful of what to expect from the weather but the wind stayed high and we slept well. 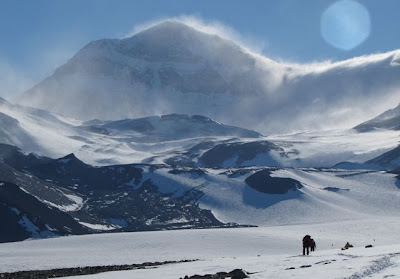 Today we are unfortunately not able to take advantage of the beautiful weather as we are on the helicopter schedule to shift our camp tomorrow and need to spend the day sorting, organizing, and packing. We also snuck in a sleep-in, have done some washing, and are communicating with the outside world. Although we’ve had another calm, sunny day so far, as I write this the cloud from the far horizon has finally developed over us, the temperature has dropped, and it disappointingly looks as if the MacTown Weather Ops forecast for an incoming storm might be correct. If we can’t do our camp shift tomorrow or Friday it will be Boxing Day, as the pilots are having the holiday weekend off. We’re keen to have as much time to geologise from our high camp as possible but there’s plenty we can do down here now that the snow has melted. Captain Oates would prefer to stay at lower elevations as it means less distance to travel to the sea should he no longer wish to be part of our team.

maison Tune in next time to find out where we’ll be having Christmas! 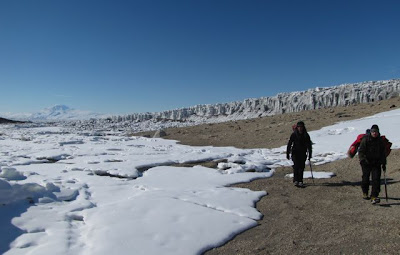